"He was arguably the most famous band conductor since John Philip Sousa" Jerry F. Junkin

When did it start?

In the 1950s, the instrumentation of wind orchestras varied significantly. It can be said that the first to unite him was Frederick Fennell, who worked at the Eastman School of Music. It occurred to him to take a wind section from the symphony orchestra, which allowed for better intonation and sound clarity, and to make it an orchestra. He collected the 40 best musicians from the school and in 1952 passed the first rehearsal. A year later, the first concert of this ensemble called the Eastman Wind Ensemble took place.

He approached 400 composers to expand the repertoire of the Eastman Wind Ensemble. The first three to answer were Percy Grainger, Vincent Persichetti and Ralph Vaughan Williams. 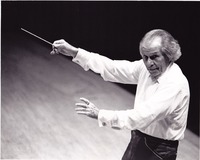 Fennell was born in Cleveland, Ohio. He chose piccolo as his primary instrument at the age of seven, as drummer in the fife-and-drum corps at the family's encampment called Camp Zeke. He owned his first drum set at age ten. In the John Adams High School orchestra, Fennell performed as the kettledrummer and served as the band's drum major.

His studies at the Interlochen Arts Camp (then the National Music Camp) included being chosen by famed bandmaster Albert Austin Harding as the bass drummer in the National High School Band in 1931. This band was conducted by John Philip Sousa on July 26, the program including the premiere of Sousa's Northern Pines march. Fennell himself conducted at Interlochen at the age of seventeen.

Fennell also studied conducting with Serge Koussevitzky at the Berkshire Music Center at Tanglewood in 1942 (with classmates Leonard Bernstein, Lukas Foss and Walter Hendl). He was appointed Koussevitzky's assistant at the Center in 1948. During World War II, Fennell served as the National Musical Advisor for the USO (United Service Organizations).