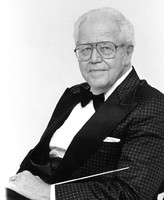 Reed was born in New York and began his formal music training at the age of ten. During World War II, he served in the 529th Army Air Force Band. Following his military service, he attended the Juilliard School of Music, studying under Vittorio Giannini, after which he was staff composer and arranger first for NBC, then for ABC. In 1953, he became the conductor of the Baylor Symphony Orchestra at Baylor University, where he received his B.M. in 1955 and his M.M. in 1956. His master's thesis, Rhapsody for Viola and Orchestra, was awarded the Luria Prize in 1959. He was a member of the Beta Tau chapter of Phi Mu Alpha Sinfonia, the national fraternity for men in music.

From 1955 to 1966, he was the executive editor of Hansen Publications, a music publisher. He was the professor of music at the University of Miami where he worked with composer Clifton Williams from 1966 until the latter's death in 1976. Williams' office was across the hall from Reed's office in the UM School of Music, and Reed was chairman of the department of Music Media and Industry and director of the Music Industry Program at the time of his retirement. He established the very first college-level music business curriculum at the University of Miami in 1966, which led other colleges and universities to follow suit. At the time of his death, he had composition commissions that would have taken him to the age of 115. Many of Reed's wind band compositions have been released as CD recordings by the Tokyo Kosei Wind Orchestra.