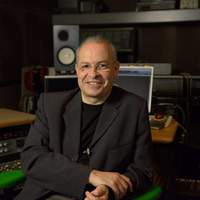 Cesarini first studied piano and flute at the Conservatorio Giuseppe Verdi in Milan. He later continued these studies at the Basel Conservatory. His teachers included Robert Suter and Jacques Wildberger (theory and composition), Peter-Lukas Graf (flute) and Felix Hauswirth (wind orchestra director). 1989-2006 he was professor for wind orchestra management at the Zurich University of the Arts. In 2001 he was appointed to the Conservatorio della Svizzera Italiana in Lugano, where he is still professor for wind orchestra direction and music theory. In 2001 he was appointed composer-in-residence at the Southeast Missouri State University in Cape Girardeau, Missouri (USA). Since 1998 he has been the permanent conductor of the symphonic wind orchestra Civica filarmonica di Lugano. Concert tours have taken him as a guest conductor to numerous countries in Europe, North and South America. In addition to extensive conducting activities, he is an expert at national and international music competitions. In terms of composition, he primarily devotes himself to the medium of the wind orchestra; his oeuvre also includes works for symphony orchestras, string orchestras, wind ensembles and chamber music works. Numerous works have already been recorded on phonograms.