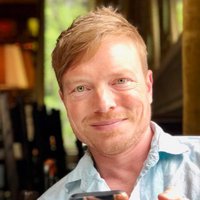 Though musicians themselves, Mackey's parents did not provide him with music lessons, and he never formally studied an instrument. His grandfather, however, taught him to read music and introduced him to digital music notation. Through experimentation with programs intended for entertainment rather than education, Mackey began to compose his own music. He wrote his first piece, Lacrimosa, at age 11, after being inspired by the film Amadeus. As a young composer, he took some lessons from one of his mother's friends, who had a Ph.D. in music.

Mackey received a Bachelor of Fine Arts degree in 1995 from the Cleveland Institute of Music, where he studied with Donald Erb. He then studied with John Corigliano at Juilliard, receiving a Master of Music degree in 1997. Mackey has stated his support for these institutions' policies of not requiring composers to perform an instrumental audition, as many composers, like himself, do not play an instrument. On this subject, Mackey has said, "There are obviously ways to compose music without playing a formal instrument."

Mackey lived in New York City from 1995-2005, where he collaborated frequently with choreographers such as David Parsons, Robert Battle, and Igal Perry. Mackey moved to Los Angeles in 2005. In April 2008, he announced on his blog his intention to move to Austin, Texas, explaining that much of his income is a result of commissions and other appearances in the Texas area. Then in March 2011, Mackey posted a blog to announce his move to Cambridge, Massachusetts in order for his wife to attend graduate school. In 2019, he moved with his wife to San Francisco, California, where he currently resides.