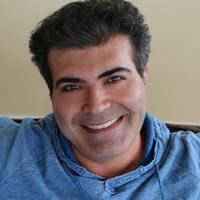 Hazo is the son of the poet and playwright Samuel John Hazo and his wife, Mary Anne. After elementary and secondary schooling in the Upper St. Clair School District, he gained a bachelor's degree in music education and a master's in education from Duquesne University. He taught music in the Upper St. Clair School District. Hazo retired from teaching in 2006. He lives in Pittsburgh, Pennsylvania with his wife and children.

Hazo began composing aged 30, and had his first composition published aged 35. In 2001, he received the National Band Association Merrill Jones Award for the best high school wind symphony composition. In 2003, he received the William D. Revelli Composition Award for his piece "Perthshire Majesty". This was the first time in the associations' forty-four year history that one person had won both composition awards.

He has composed for the professional, university and public school levels in addition to writing original scores for television, radio and the stage. His original symphonic compositions include performances with actors Brooke Shields, James Earl Jones, and Richard Kiley. Most recently, Mr. Hazo was asked by the Newtown School District to compose the memorial for the children and women who were lost in the tragedy at their Sandy Hook Elementary School. The result was a major work for Choir, Orchestra and Wind Band combined titled "Glorificare". It was premiered in May 2013 by the Hartford Symphony Orchestra and VOCE Singers performing side-by-side with the Newtown High School musicians. Mr. Hazo also composed "Bridges", which he was requested to write by Virginia Tech University following their tragic shootings. In 2012, two of Mr. Hazo's compositions were performed at the London Summer Olympic Games. His piece "Mountain Thyme" was an Honorable Mention for the 2013 College Band Directors National Association Composition Contest.

On the Internet, Mr. Hazo's music has compiled over ten million hits on YouTube. His compositions have been performed and recorded worldwide, including performances by the Tokyo Kosei Wind Orchestra (national tour), the Birmingham Symphonic Winds (UK) and the Klavier Wind Project's recordings with Eugene Migliaro Corporon. Additionally, numerous titles of Mr. Hazo's works are included in the series "Teaching Music Through Performance in Band." He has served as composer-in-residence at Craig Kirchhoff's University of Minnesota Conducting Symposium and has also lectured on music and music education at universities and high schools internationally. In 2004, Mr. Hazo's compositions were listed in a published national survey of the "Top Twenty Compositions of All Time" for wind band. He is a member of ASCAP and recipient of multiple ASCAPlus Awards. Dr. Jack Stamp, in his final year of teaching at Indiana University of Pennsylvania, produced a recorded compilation of Hazo's music.

He has been invited to guest conduct over 70 university ensembles and half of the All-State bands in America. Mr. Hazo was twice named "Teacher of Distinction" by the southwestern Pennsylvania Teachers' Excellence Foundation. He served on the Board of Governors of Duquesne University and was awarded as Duquesne's Outstanding Graduate in Music Education. Mr. Hazo serves as a lecturer and clinician for Hal Leonard Corporation.