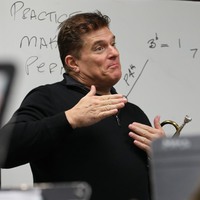 He released several of his compositions under the pseudonym Emilio Maccolini. Melillo first studied physics at the University of Connecticut in Storrs since 1976, but from 1979 he studied music at the Manhattan School of Music in New York and then at the Boston Conservatory, where he earned a bachelor's degree in 1980. He then went to Columbia University in New York to study orchestral conducting with Jens Nygaard and Atilia Pot, a student of Arthur Toscanini, and earned a master's degree. He is also the author of 3 children's books and has also written jingles for Sega, Nintendo, IBM and others. Mathematics and music have a huge coherence for him, for example in the song Godspeed! you can notice the Fibonacci sequence he used in both intervals, dynamics, pauses, and tempos.