The Midwest Clinic International Band, Orchestra and Music Conference offers guests interested in music education an array of clinics and exhibits, as well as access to music and teaching icons. The conference will also focus on industry trends and future topics in business and music education. With more than 18,000 attendees from all 50 states and more than 40 countries. 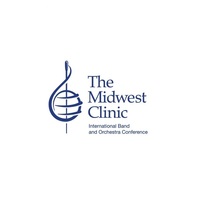 The Midwest Clinic began on Dec. 7, 1946, when approximately 120 directors from the Chicago area assembled in a YMCA gymnasium on Chicago's West Side for a six-hour clinic and new music reading session. In 1947, the event was expanded to two days and moved to the Hotel Sherman to take advantage of the larger music conference-compatible facilities and accommodations for out-of-town directors. Besides the two-day format, this second installment brought many new features, including a printed program, an additional band and a new name: The Midwest Clinic. The VanderCook School of Music, Neil A. Kjos Music Company and Lyons Band Instrument Company sponsored the music conference. For the next 25 years, the Hotel Sherman was home to The Midwest Clinic. In the 1950s, orchestras and jazz ensembles were introduced, and in 1962, The Midwest Clinic held its first official Orchestra Day.In 1963, the music conference expanded to a four-and-a-half-day format. In 1973, The Midwest Clinic moved to the Hilton Chicago, where, with several nearby venues, it was held until 2008. In 1995, the Blackstone Hotel was used in addition to the Hilton for hosting clinic conference events. With the addition of this facility, The Midwest Clinic was able to present more clinics than ever in its history. In 1999, the Congress Plaza replaced the Blackstone Hotel as the second site of music conference events. The Blackstone Hotel and Merle Reskin Theatre were used as additional sites in 2008. In 2009, The Midwest Clinic moved to McCormick Place West, bringing all the music conference programs and exhibits under one roof.In the earliest years of the "Midwest Clinic," the organizers - H.E. Nutt, Howard Lyons and Neil Kjos, Sr. - invited outstanding bands to perform, based upon the reputations of the organization and its director. In addition to giving a formal concert, the bands were also expected to provide a sight-reading session, with the selections being requested by audience members on the spur of the moment. Today, The Midwest Clinic continues to feature performances by outstanding organizations, but now every group that desires to perform at the international music conference must first apply to do so.Over the years, the focus of The Midwest Clinic has remained on bringing international music directors into contact with not only the best published music, but also with new and established teaching techniques, and the latest products and services for the music educator.